What is Doxing and How to Prevent it?

The Internet can be like the Wild West: no rules apply. That has allowed previously underground groups and movements to flourish, such as those with extreme anti-government agendas and revisionists who promote neo-Nazi fascism. In this atmosphere, the gloves are off, and harassers feel free to berate and intimidate those who do not agree with hate speech or false information posted online.

What is Doxing and Why is it a Problem?

Facebook, the primary social media platform favored by many fringe groups, has struggled to police its 2.8 billion users and has been unable to hire enough knowledgeable content moderators. The Pew Research Center says that abusive speech and rates of intimidating “purposeful embarrassment” is climbing. These indicate an erosion of privacy and freedom of speech online. The National Institutes of Justice report that up to 37 percent of adults say they have been victims of online abuse. The result can be doxing (also spelled doxxing), derived from “dropping docs,” or revealing personal information about an individual against their will. Doxing is a form of purposeful embarrassment, unveiling quasi-private information about those we disagree with to silence and intimidate them.

Doxing can be achieved by digging up information about an individual, through publicly available people records or hacking their account to reveal private data. Doxing is also an invitation to others who want to cause harm, directing their efforts toward one victim.

Such online harassment and intimidation can take many forms. Those who routinely bully victims this way are familiar with the line between finding and revealing information to silence victims and doing too much that can be considered stalking or actionable harassment. They also mask their identities to avoid legal implications. 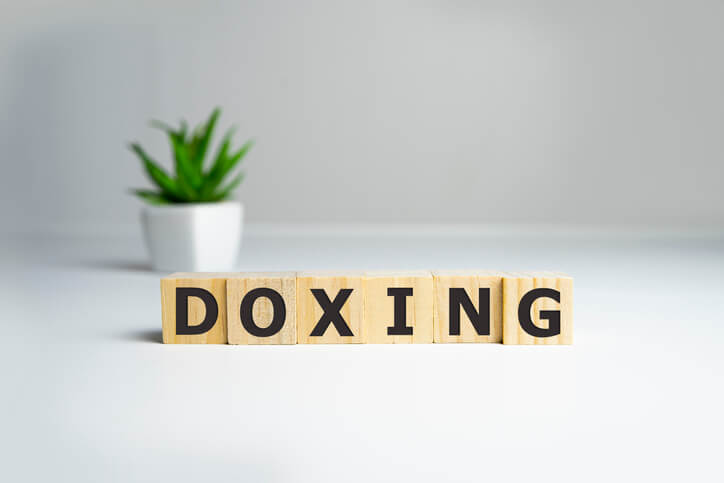 Types of information used in doxing may include:

Half of those who reported online bullying say it was related to politics, a significant increase from three years ago.

Escalation of doxing is a real possibility. Once online trolls know a person’s identity and home address, they may use different tactics to silence or manipulate the victim, including swatting. In that scenario, bullies may call law enforcement to report a dangerous incident at the doxing victim’s home or place of work. This can result in a full-scale emergency services response, including a SWAT team, police, fire department, and more.

Some laws limit online stalking and bullying, but many are written to protect school children. The bar is high for those hoping to use the law to stop online doxing, which defies easy definition and proof. Experts at the American Bar Association say that prosecuting doxing is complex due partly to varying laws about it. In addition, the Communications Decency Act protects websites and social media platforms from prosecution for allowing hate speech that results in doxing. To pursue a legal remedy, victims must prove that:

What to Do if You’re a Victim

If you are a victim of doxing, collect as much information as possible before comments are removed from social media sites. Contact law enforcement with your complaint, and do not hesitate to change passwords on all accounts.

How to Prevent It

State and national laws are slow to catch up with the latest cybercrimes, including doxing. More Americans, even youth, report online victimization yearly, making it a growing concern. Moreover, what starts as online bullying and doxing often morphs into other cybercrimes such as account hacking. Mental health, particularly of young adults, some of the most likely victims of online intimidation, has deteriorated in recent years. Doxing carries real and significant implications that should not be ignored.