What are Romance Scams?

Romance scams are some of the most straightforward scams for people to fall for; in 2021, victims lost over $950 million to con artists via romance scams. Romance scams are difficult to police, as the victim is often unaware of the dangers until it is too late. There are various ways that romance scams can occur; knowing the signs and being proactive will save you and your family from the potential dangers of any scavenger con artist.

What are Romance Scams?

Online scams come in various horror-inducing ice-cream flavors; there are advance-fee scams, tech support scams, phishing, government imposters, and a rash of other like-minded carcinomas, the goals of which are all stolen money. Romance scams, in particular, are insidious because they abuse human nature. They do this by holding a person’s emotions hostage in exchange for money or information.

Scammers prepare two types of romance scams. The first is the traditional version: con artists target a person in emotional turmoil or without close familial support and then start maneuvering into the victim's most intimate confidences. Often the victim believes that the scammer truly loves and supports them. After this, the scammer pressures the victim, further degrading the victim's emotional state.

Once the scammer believes they are close enough to the victim emotionally, they will begin to ask for money and information. Sometimes, they will force their victims into becoming money mules for laundering and other scams. Money mules are any person who transfers funds on behalf of, or under the direction of, another party—money mules are how money laundering is done (at least by these scammers).

The second kind of romance scam runs similarly to the traditional. Still, it is different because it takes advantage of a victim’s emotional state through a cocktail of perceived authority, emotional instability, and humanistic altruism. These scams are also called confidence scams, as they work by the con artists presenting themselves as authority figures on emotionally-fueled events—in turn, they often become figureheads, claiming to act on behalf of the benefits for the survivors of or after a tragedy.

In the days after tragic events, crowd-funding websites often become inundated with these scams, claiming to “only want to help” the survivors and their families. In reality, none of those affected people receive assistance, as the scammers can delete their accounts and run into the internet void. 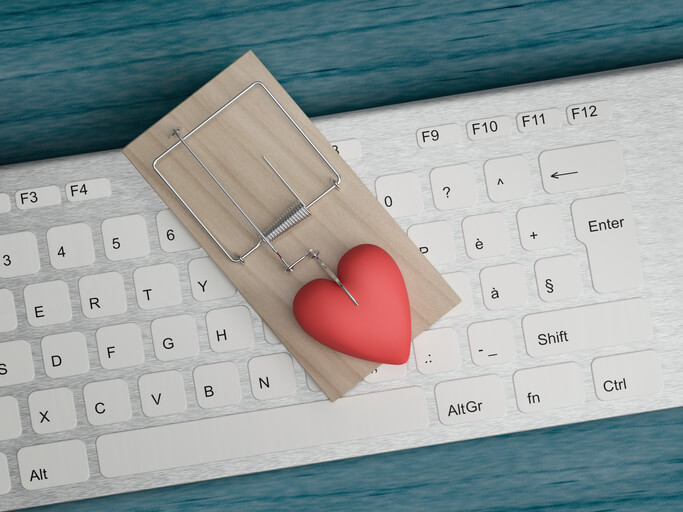 Signs You’re a Victim of Such a Scam

There are a few ways to tell if you are the victim of a romance scam:

Additionally, in the case of those unfortunate victims that become money mules, there are three types recognized by the government in scams:

There are consequences for everyone involved with scammers. Even the unwitting money mule will have to answer for their actions, even though they are often blackmailed or entirely blindsided by the scammers. Frequently, victims of romance scammers suffer from identity theft, personal liability, negative credit scores, and in many cases, banks will refuse to work with them again or in the future.

Additional punishments are accrued from the legal system too. Any individual that becomes involved with a romance scammer, even unwittingly, may face the following outcomes in the Federal legal system—they can be charged with:

How to Avoid this Scam

Romance scams (and confidence scams) work because the scammers target select people. Victims usually will fall into one of three categories:

Each one of these categories comes with special "rules" that a romance scammer will use to manipulate the victim. The lonely, for example, is typically a middle-aged victim who has just lost their spouse or a family member—this tragedy opens the doors for scammers.

Typically, this is because the natural defense and skepticism that a person would usually have during these interactions have been hindered or, in many cases, completely disintegrated. The scammer then showers the victim with attention and takes advantage of the tragedy to encourage them to expose information or give them money.

In comparison, the outcast falls for these romance scams via the scammer playing to the human desire for affection. The victims in these cases rarely come forward because of the embarrassment and connotations attached to these scams.

For example, a college-aged student who falls in love with a romance scammer online and who sends them money consistently (maybe to help with medical issues or to help provide the scammer's family with food) is less likely to report the incident ever happening.

Unfortunately, this is because of the stigma set around those victims who fall for the scam; many people may consider the victims foolish or uneducated when this is not the case.

Elderly Become Victims All Too Often

The elderly stand in contrast to the lonely victim and the outcast victim—the scammer who uses an elderly victim is one of the most dangerous. The elderly are generally not fully aware of their presence online, and the ones that are, are not interested in romance usually.

Often, once the romance scammer wriggles into the victim's confidences, it becomes nearly impossible to remove them from that status. That is especially true with elders who are isolated or lonely. Elderly victims of romance scams get coursed into giving their scammers everything thanks to fear-mongering, blackmail, and flat-out aggression.

Individuals who choose to speak to strangers online would do well to remember the following proactive measures for every interaction they have with an unknown person:

Additionally, it is worth noting that some scammers will approach victims, not one-on-one like on a dating site, but through job applications in emails. Be very careful if you have received a “possible job opening” out of the blue, especially if they want your personal information before they begin the “hiring process.”

Learn the Dangers of Romance Scams

Every adult that uses the internet should be aware of the dangers that come with it. It is not enough to reason with ourselves and say, "oh, but that will never happen to me." Confirmation bias is at the root of many of these romance scams.

Proactively protect yourself and your family by practicing a conservative online presence. No matter whom you meet on the internet or how much you trust them, have a background check done before you share anything of value.