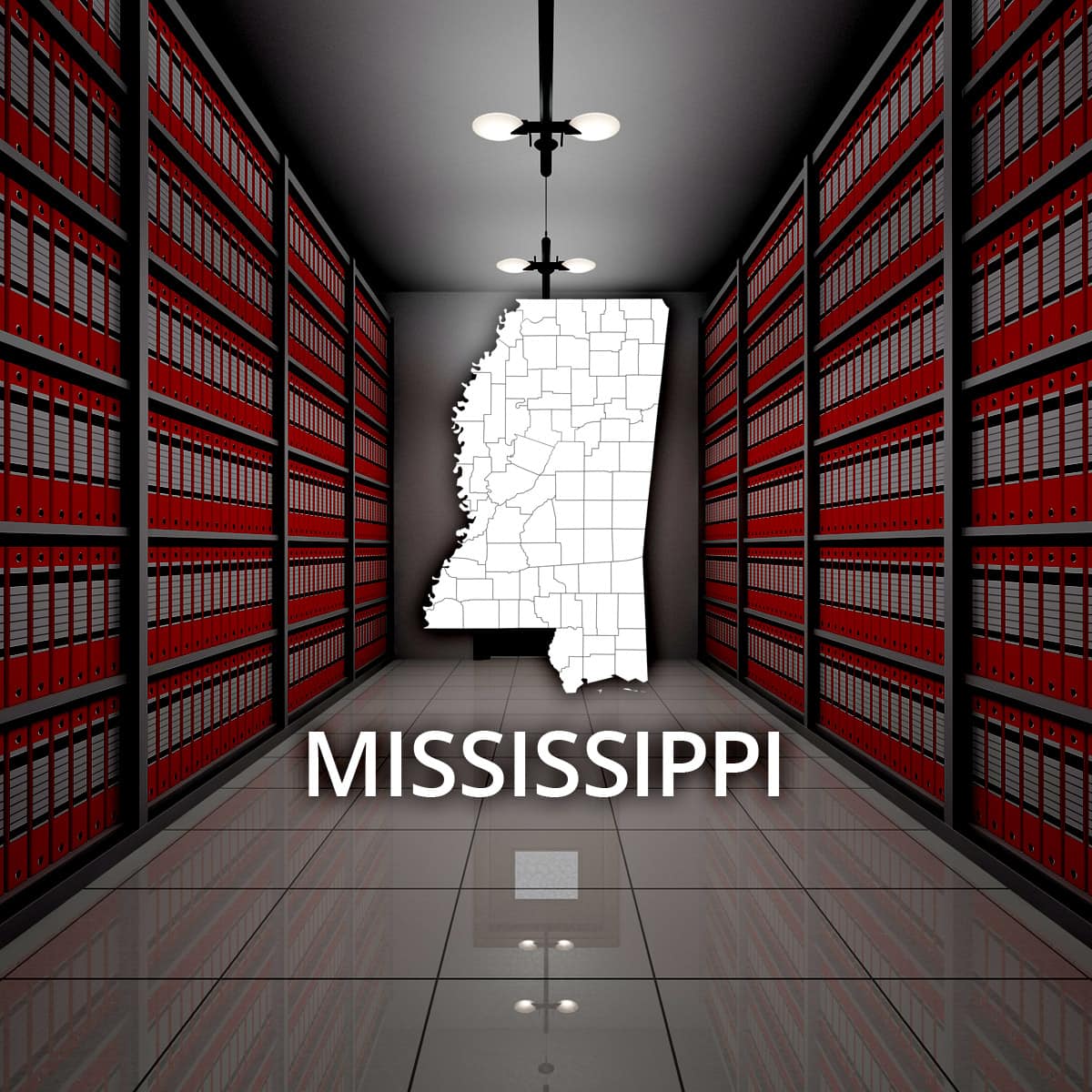 The state of Mississippi, also known as the Hospitality State and the Magnolia State, is 170 miles wide and 340 miles long and is the outlet for the country's largest river to the Gulf of Mexico. Its largest cities other than Jackson, the state capital, are relatively small, with none having more than 70,000 residents.

Prior to European colonization, Native Americans of the Choctaw, Chickasaw, Biloxi, Natchez, and Yazoo tribes settled along the lower Mississippi River. These mound-building cultures were undisturbed by Europeans until explorer Hernando De Soto visited in 1540. In 1699 the first French settlement was established near Old Biloxi. The French turned the territory over to the British after losing the French and Indian War. The British relinquished title to the area after the American Revolution. Mississippi became a U.S. territory in 1798, and became the 20th state in 1817.

Mississippi was formed by the river delta of the Mississippi River and is therefore rich lowland soil. Unfortunately the naturally-occurring woodlands found in the state were cleared near the river to take advantage of the soil for farming and that resulted in making the area prone to devastating floods. Hurricane Katrina caused significant damage in Mississippi as well as Louisiana in 2005. There was a 28-foot storm surge and 11 tornadoes as well as 236 deaths in Mississippi caused by that hurricane.

Known for catfish and cotton, the state's largest agricultural export is broiler chickens, which brought $2.3 billion in revenue in 2012. Other major agricultural industries include lumber, soybeans, corn, cows, and hay. As the top aquaculture farm state for catfish, there are 51,000 acres of catfish ponds.

The history of Mississippi agriculture is inextricably intertwined with the history of slavery in the Deep South. While tobacco was a major product in the 1700s, the cotton gin and steamship changed the face of agriculture in the 1800s. Large cotton plantations shipped cotton fabric overseas, and intensive work required to do so fed the South's need for slaves. One crossroad, called the Forks, in Natchez, Mississippi is well-known as a place where slaves were bought and sold. The nearby Natchez Trace road was used in the 1830s to march slaves from northern markets to southern markets where the demand was greater for cheap labor. Men and women were chained together and guarded by men with guns as they marched south in the heat of midsummer to be sold, which often separated families. In the 1860s more than half of the state's population was slaves.

In the Civil War, Mississippi was the second state to secede from the Union, in 1861. In 1863, both the city of Jackson and Vicksburg were seized by Union forces lead by General William Tecumseh Sherman. Confederate General Jefferson Davis was from Mississippi, where he owned a large plantation and many slaves. At least 17 battles of the war were fought in Mississippi. Many plantation owners were lukewarm on the Confederacy due to personal and economic ties to northern states and industries. Black slaves were subtly encouraged to join Union troops when pay was increased to equal that of white soldiers, and one of the first Black Union army units was formed in New Orleans.

As a result of that legacy of slave ownership and emancipation, Mississippi has the highest percentage of African-American residents of any state in the country at nearly 37 percent. Whites constitute 59 percent of the state, and Latinos, 3 percent.

The University of Mississippi Medical Center is the state's largest employer, with 9,500 employees in Jackson. Nissan's automobile plant in Canton is the largest private employer, with 6,000 employees. The North Mississippi Medical Center in Tupelo and Biloxi-based Beau Rivage Casino are also on the list of largest employers with about 4,000 each.

The state population is holding steady at just under 3 million people, due in part to the low median household income of $39,000, circumstances that allow 22 percent of residents to live in poverty, and the fact that just over 80 percent of adults have a high school diploma. The unemployment rate for the state is at 6 percent while the national unemployment rate is 4.9 percent. Some of the cities that are experiencing population growth are those closest to Memphis, TN.

The state capital of Jackson is the most dangerous place in Mississippi for crime, with one source reporting a 1 in 108 chance of being a victim. Its 176,000 residents reported over 600 aggravated assaults and 50 murders or non-negligent homicides in recent years, for a total of over 1,600 violent crimes. The cities of Greenville and Meridian likewise had 99 reports of violent crime and 7 murders and 233 violent crimes and 3 murders, respectively.

Mississippi public criminal records do not appear to be online. One way to access information about convictions is to use the inmate search option on the Department of Corrections. In order to retrieve a court record one must contact the clerk of the court where the trial or pleading. Performing a search on RecordsFinder.com may return similar results.

Probate records, which include wills, records of descendants, and property records, may be found in Mississippi Chancery Courts. Records are not available online; one must contact the clerk in the court where the individual lived or owned property in order to learn the availability of documents.

Birth, death, and marriage records are held by the Mississippi Department of Health, which allows online ordering of certified copies with some restrictions – individuals must meet a certain standard of "tangible interest" to receive copies. Tangible interest is defined by being the individual named on the certificate, the parent of the person on the certificate, or a legal representative, and positive identification is required.

The easier way to get access to Mississippi state vital reports is an online search through RecordsFinder's online database.